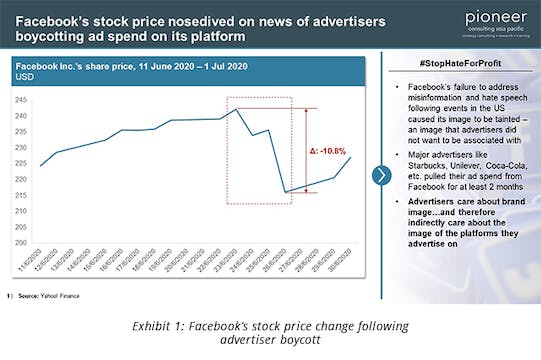 On the surface, telcos appear well placed to take a piece of Southeast Asia’s USD 13 billion digital advertising pie. Large telcos have direct relationships with sizeable customer bases (often bigger than audiences of successful media properties) and they collect a vast amount of valuable data on their customers. Adding to the appeal of this opportunity is the fact that the two dreaded leaders in digital advertising, Google and Facebook, have both experienced push back from their ad customers due to their inability to ensure ads are not paired with inappropriate content. This has had a material impact in Facebook’s case – its share price fell over 8% in just three days when advertisers announced a boycott of ad spend on the platform.

This has opened the opportunity for telcos to position themselves as more responsible advertising platforms to local advertisers. According to Pioneer Consulting Asia-Pacific’s (PCA) analysis, the addressable market of the total digital advertising pie in Southeast Asia that telcos are positioned to capture is valued between USD 1.5- 3 billion.

While telcos have entered the advertising sector both through acquisition and organic plays, neither approach has moved the needle much for their top or bottom lines. PCA’s analysis found that most telcos have been focused on ad initiatives that essentially replicate existing ad platforms’ capabilities. However, these initiatives often do not fully leverage the telco’s proprietary data and are even less likely to tap into the telcos’ diverse customer touchpoints which is one of their core differentiators. For instance, a telco in Thailand recently partnered with an ad tech platform that allows ads to be overlaid on live sports OTT content. A technologically advanced play, but one that is only truly differentiated when ad campaigns are integrated across all of the telco’s assets, not just the OTT platform.

Telcos have also faced significant challenges positioning themselves as credible players in this space to both media platforms they partner with and media buyers. Anecdotal evidence suggests this is due to the perceived lack of commitment on the part of telcos.

Given the attractive size of the ad market and the openings created by pushback against Facebook and Google, telcos should be focused on making a dent in this sector. So, what strategy is needed for a telco to become a successful player in the ad space?

Telcos should target small wins that exploit their entire ecosystem of partnerships and touchpoints with their customers.

How can telcos achieve this?
- 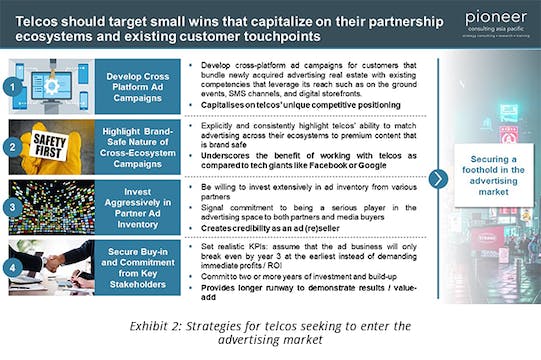 - Telcos should develop cross-platform ad campaigns for customers that bundle newly acquired advertising real estate with its existing competencies that leverage its reach such as on the ground events, SMS channels, and digital storefronts.

- Telcos needs to set realistic KPIs that assume the ad business will only break even by year 3 at the earliest and therefore commit to two or more years of investment to build the business.

- Telcos must expressly highlight its ability to match advertising across their ecosystem to premium content that is brand safe, thereby underlining the benefits of working with telcos as opposed to Facebook or Google

There is an opportunity for Telcos but realising it will not be easy. Telcos needs a credible partner.

This report was contributed by Pioneer Consulting Asia-Pacific, a ConnecTechAsia media partner and speaker at CommunicAsia. Join their MD, Virat Patel, on 2 panels 5G Tests, Trials, and Launches for Enterprises (30 September) and Next Gen Proposition for Home Connectivity (1 October) at this year's fully virtual #ConnecTechAsia.