UCPE: A LAUNCHPAD FOR THE NEXT GENERATION ENTERPRISE SERVICES 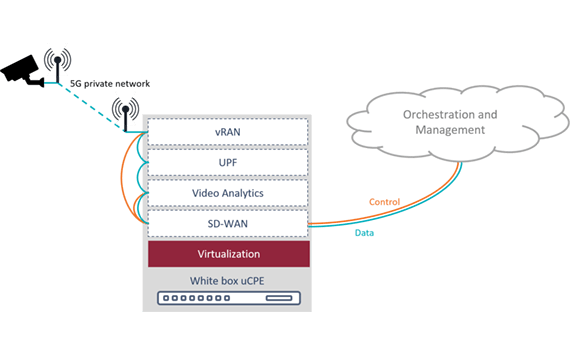 Photo: Video analytics, private mobile network, and enterprise networking coming together on a single uCPE which connects to control and services in the cloud.

I recently participated in a webinar with Christopher Silberberg, Research Analyst at Omdia, where we made a series of proposals explaining how managed service providers (MSPs) could grow their businesses by offering add-ons to basic networking services. You might, quite rightly, say that MSPs already do this. The key to success in our case requires leveraging universal customer premises equipment (uCPE) as a highly flexible and cost-effective service delivery platform at the edge.

A major challenge for MSPs is the ability to keep up with advances in technology and the customer demands that follow. The need to rip-and-replace fixed-function equipment in order to upgrade services slows down technology adoption, leaving the end user with outdated services.

MSPs are turning to uCPE as the solution. It has proven to be a flexible service delivery platform allowing applications and network services to be added, changed or replaced simply and rapidly, according to demand, using a centralized management system.

To show how this can be done, I presented 3 examples of use cases: managed wi-fi, video analytics and private mobile networking. In each case, I described the role of uCPE and defined how and where the added value can be found. Before I go into the details, however, I think it’s useful to explain why add-on services are so important to MSP profitability.

The Need to Combine Networking with High-Value Services

The infrastructure used for enterprise networking at the customer premises edge is evolving rapidly. It started with individual routers, load balancers and firewalls, moved to the very popular combination of SD-WAN and security (e.g. next generation firewalls -NGFW), and is now finding a growing interest in SASE-like architectures.

This evolution has occurred in response to the changing requirements of business and technology. However, despite these changes, the use case has remained the same throughout: infrastructure for secure enterprise networking. Up until now, this infrastructure has consisted mainly of a basic service and some limited possibilities for MSPs to differentiate their offering from the competition. The outcome is that over time, the basic service becomes a commodity.

For this reason, add-on services are an important part of any MSPs’ portfolio. Often specialized and sometimes bespoke, they represent higher value to the end user and help MSPs to differentiate their offering while also increasing margins. There are, of course, many different add-on services that can be offered to enterprises. The choice, deployment and profitability of these services depends, to a large extent, on the flexibility of the infrastructure on which they are created and delivered. Deploying a packaged vendor bundle can seem like a simple solution at the outset, but lock-in often reveals limitations to service creation and delivery, and high costs over the long-term.

The following three use case examples show the advantages of deploying uCPE at the edge on top of which you can freely add and update services using a virtualization platform for local management and control.

1 - Managed Wi-Fi as a Service

Guest Wi-Fi is a popular and expected service in locations such as airports, hotels, and other public places. In venues such as malls and arenas, carriers also use wi-fi to offload the mobile network, increasing bandwidth and enabling localized services. Centralized management allows providers to monetize services and implement common policies, access control and, in the case of public and enterprise Wi-Fi services, user management. This management component is typically a cloud-based service that enables the configuration and monitoring of Wi-Fi networks from a central location. However, it is necessary to feed the management component with locally sourced data.

In a small location, such as a small office, a café, or a convenience store, a single access point can be integrated directly with the uCPE itself. For bigger sites such as large offices, airports, and hypermarkets, the Wi-Fi controller is provisioned on the uCPE and connects to several access points providing coverage for the whole site.

Many enterprises will combine large and small sites, connecting them all to a single centralized management portal in the cloud.

In this configuration, managed Wi-Fi becomes just one of potentially many add-on services the MSP can provide on top of the existing infrastructure. Because the uCPE is centrally managed and services can be deployed on-demand, the time to activate a new service is reduced from months to minutes.

2 - Video Analytics as a Service

The second use case I addressed in the webinar was video analytics and how artificial intelligence (AI) at the edge can provide numerous interesting and profitable enterprise services. A few examples are:

A challenge when provisioning video analytics as a service is to process the many video streams. A single camera produces many GB of data every day. With a reliable fixed connection, that data stream can easily be transferred to the cloud for processing. However, if many cameras are used or if the cameras are in a remote location with only a mobile connection, the bandwidth required to transfer the video streams to the cloud service will be insufficient and create a bottleneck.

The solution is to place the analytics software at the edge on a uCPE near the cameras. This enables aggregation and processing of the video streams before the information is sent to the cloud service. A uCPE already hosting secure connectivity through a software defined wide area network (SD-WAN) service is the perfect location for the edge AI software. It optimizes resources and avoids deployment of an additional fixed-function appliance. Also, while edge AI applications can use a CPU for processing, a GPU available in the uCPE will greatly increase its capacity and precision.

The third service example I presented was private LTE/5G that provides secure and robust communication for industrial IoT devices. By using private mobile networks, factories, harbors and other industrial sites can access wireless communication with low latency and high bandwidth over large areas.

Autonomous guided vehicles is an excellent example of an industrial use case where private LTE/5G plays an important role. Remote control of vehicles and autonomous driving that relies on cooperative behavior through m2m communication require reliable wireless connectivity.

In this context, the uCPE can host parts of the mobile network, for example the virtualized radio access network (vRAN), and latency-sensitive core functions such as the user plane function (UPF), side-by-side with connectivity to the cloud and enterprise networks carried out through secure SD-WAN. Multi-access edge computing (MEC) applications can also run on the uCPE, benefitting from co-location with networking and possibly terminating the user plane.

Radios are deployed separately from the uCPE to provide the best coverage. A private LTE/5G solution is then often complemented by an LTE/5G core deployment off premises, even though it is actually possible to run all network functions on uCPE if it is powerful enough.

Autonomous vehicles in an industrial environment can also make use of both managed Wi-Fi and video analytics. Video analytics, often implemented as MEC applications, and Wi-Fi complement the private LTE/5G for noncritical enterprise communications and guest networks. So, it is possible that all three services presented in the webinar could be provisioned on the same uCPE.

Conclusion: Deploy Services on uCPE as a Launchpad to Grow Your Business

The ability to rapidly and easily replace or change services provisioned on uCPE allows MSPs to evolve their offerings seamlessly and cost-effectively. End users benefit from rapid access to new features, improved security, higher performance, and the ability for customization. Equally important, uCPE also enables new add-on services, allowing MSPs to expand their business with each customer through services that are tailored to the needs of each enterprise. This is an excellent way to create differentiation in a crowded MSP market.

The bottom line, therefore, is that deployment of uCPE as a service delivery platform at the customer premises secures a bridgehead for future expansion, even if the initial service is very simple and based on a single application from a single vendor.

uCPE is a launchpad for next generation enterprise services at the edge, seamlessly combining corporate networking with high value add-on services for increased revenue and higher margins.